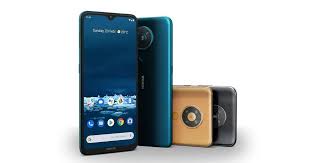 Nokia 6.3 is reported to be the next mid-range smartphone from the Nokia-brand licensee, HMD Global.
According to a report, the phone will triumph the Nokia 6.2 that has been established last year and sit above Nokia 5.3 which premiered in March this year. It was also tipped the rumored Nokia 6.3 will package the Zeiss-branded quad rear camera setup along with a Qualcomm processor combined with 3GB RAM. The phone is expected to emerge in the third quarter of 2020. At the moment, HMD Global has not confirmed that the development, so it is suggested to take the information with a pinch of salt.
The telephone is also tipped to pack Zeiss-branded rear cameras, however, the camera details remain unclear. The report citing a source also hinted that the phone will likely package a 16-megapixel front camera. It was further noted that the foundation 3GB RAM + 64GB version of the Nokia 6.3 will cost EUR 249 (roughly Rs. 20,400).
As the name implies the Nokia 6.3 will triumph the Nokia 6.2 which has been launched in September 2019. In terms of the camera, Nokia 6.2 includes triple back cameras and there is an 8-megapixel camera on the front panel. The telephone was launched in India in October 2019 to get Rs. 15,999 (4GB + 64GB storage variant).
The report also included the Nokia 6.3 will sit right over the Nokia 5.3 which was launched in March this year. Nokia 5.3 includes a quad back camera setup that contains a 13-megapixel main camera. The telephone is powered by Qualcomm Snapdragon 665 SoC coupled with 3GB RAM. Nokia 5.3 also has an 8-megapixel front camera.
https://feeds.feedburner.com/Justabcdcom